A friend of ours has been to Haida Gwaii many times, twice making it to the park on Moresby Island (Gwaii Haanas National Park Reserve and Haida Heritage Site) on her own boat.  For some reason, Skedans came up in conversation frequently – no doubt the place had left an impression.

Skedans is the first Watchmen site in Haida Gwaii as you work your way south from Skidegate Inlet, and the only one not actually in the park.  It is on an unsheltered neck of land that looks like it juts out into the inhospitable environs of Hecate Strait.  Before we arrived, I had conjured visions of an open, rocky anchorage surrounded by sea monsters and storms.  I fully expected to give it a pass lest we come to some grief.  Maybe we could wave as we passed by.  My visions weren’t far off, but thankfully, both the sea monsters and weather cooperated, leaving only the terrible, rocky anchorage to deal with.  We enjoyed our stop, but I watched the boat the whole time.

After leaving Bearskin Bay, the anchorage at Queen Charlotte, incredibly early, we arrived at the Skedans anchorage with another boat around lunch time.  The tidal range in Haida Gwaii is a maximum of 26 feet – the currents can be vicious and we’d left at 2am to avoid the morning morning flood fl 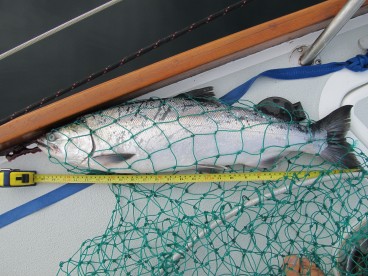 owing into Skidegate Inlet and north in Hecate Strait.  With almost no wind, we’d motored most of the 30 miles to Cumshewa Point, caught a nice salmon, and then made our way into the channel separating Skedans from a group of small, rocky islands lying close offshore.  While this whole area requires a careful watch as there are hazards everywhere, we had no problems picking our way into the small bight south of Skedans.  There is a buoy in the incredibly tight bay in front of the village site, but along with the other sailboat, we elected to anchor out farther.  As was the case at all of the other sites, the anchorage was marginal, and only suitable for short stops in settled weather.

oed to ask permission to go ashore, and were told that we could join the crew from the other boat, making for a party of six; this was the only site were we spent time with the crew from another vessel as the watchmen make to some effort to maintain a wilderness feel for their visitors by limiting the numbers ashore.

Shyla, our capable guide. Meeting the people working at each site was a highlight of our trip in Haida Gwaii

While the approach was tricky, the landing was very easy. For defensive reasons, the Haida valued village sites that required careful navigation to approach, hence the care needed as we motored in.  They also valued beaches that were easy to land on as canoes were their main mode of transportation and they needed to be able to pull them up out of the water and launch them easily.  Skedans’ bay is typical: rocky offshore hazards leading to a very small, shallow and well protected bay headed by a gentle pebble beach.

Upon arrival, we were greeted by a very friendly young lady named Shyla.  The watchmen do shifts of a few weeks at these site, living in small longhouses.  Originally, the watchmen were volunteers from Skidegate or Masset whose job it was to literally watch the site to deter theft and vandalism of any remaining artifacts.  Their role has evolved over the years, and while they still watch over the sites, they also welcome visitors and act as interpretive guides.  Shyla was typical in that she was knowledgeable, friendly and very generous with her time.

A Mortuary Pole at Skedans. The person buried in this pole did not die of misfortune – you can tell because the small human figure being licked is upright.

Skedans itself is one of two watchmen sites at which one can view standing totem poles (the other is SGang Gwaii at the south end of the park).  In addition to the totem poles, there are a number of longhouse sites to see.  Without some explanation, the house sites look like large holes with rotting trees lying in them.  However, Shyla, like her colleagues further south, was able to conjure images of what life would been like in these structures.  She explained the building process, the political structure (which was tied intimately to house construction), and the living arrangements in these dwellings.  In addition, we were taught the about the significance of the three different types of totem poles, and how art, story, and societal structure were all interconnected and represented.

Remains of a longhouse. The houses were all built around a large, tiered pit. These pits were large, and were dug by hand over one day only. Large holes would’ve required many workers. Therefore, the size of the hole was a symbol of wealth and prestige.

Skedans was wonderful; seeing these sites and learning about the culture first hand are the main reasons to cruise here.  However, the marginal anchorages at each site do not inspire confidence, and you’d need to be bigger risk takers than we are to overnight at one.  The closest good anchorage is Thurston Harbour which is a short distance south of Skedans and is the first logical stop for boats heading south.  As such, it is relatively popular.  By late afternoon, there was a total of four other boats sharing the large bay with us, one of which we’d met a couple of weeks earlier in Port McNeill.  Despite the stiff afternoon breeze that developed, we made plans to dinghy over and enjoy a staple of our cruising life: a potluck.  We had a wonderful evening, and planned for more over the next few days.  Unfortunately, those plans didn’t pan out, and we spent the remainder of our time in Haida Gwaii as the only boat in each anchorage.

My dad enjoying an evening aboard Ultegra, a Beneteau First 42 currently cruising the Sea of Cortez.(http://svultegra.blogspot.ca/)