This is for some friends who are leaving for Haida Gwaii in a couple of weeks.  I hope you enjoy your trip as much as we enjoyed ours. 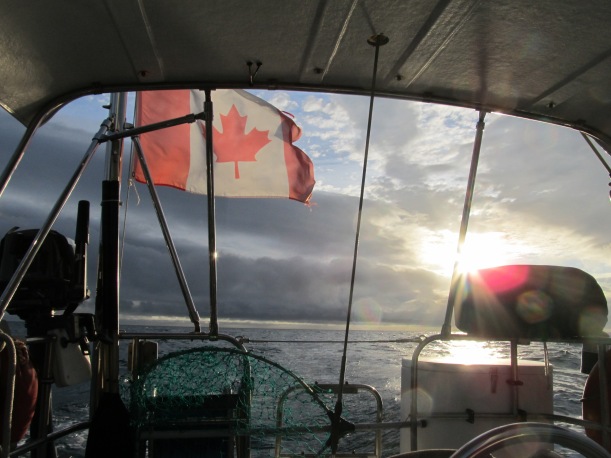 The sun setting over Haida Gwaii, 50nm behind

I’m not sure how others who’ve cruised Haida Gwaii felt about crossing Hecate Strait, but I do know that it was a life event for me.  In hindsight, both crossings were smooth and  easy, but really these passages are just as much about dealing with the mythology that surrounds them, and the ensuing anticipation, as they are about the actual event.  The same has been true for all of the “notorious” stretches we have sailed: Cape Caution, Cape Scott, Brooks Peninsula…  We are careful and strategic when choosing our weather windows, and have the boat and ourselves well prepared; without fail this work means that each new trial is no trial at all.  Even so, I still wonder on each new adventure if this next crossing or rounding will be the one where preparation and planning fails.  Will this one be the one where the ocean has her way?

Early on in our planning, far from the north coast and with the comforts of our home and time, we decided it might be fun to do two overnighters on our Haida Gwaii trip – one each way across Hecate.  As we worked our way north, this ideal became expendable.  Reality has a way of changing things.  Eventually, we settled for a very uneventful motor across the strait and anchored in the dark.  Not quite the same as an adventure filled night sail, but it did involve mucking about in the dark and allowed a huge sigh of relief.  One down, one to go.

After three wonderful weeks exploring the islands, it was time for part two.  Unlike our first crossing at the end of a long stretch of sun and strong westerlies, our second crossing had to fit into a tight window between the low pressure systems that had been sweeping across the islands on a regular basis. Sun, rain, wind, repeat.  Our strategy became listen, decide, and go.  We needed to pick a window and leave with no hesitation. 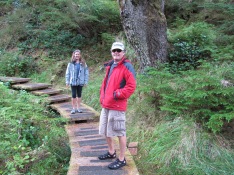 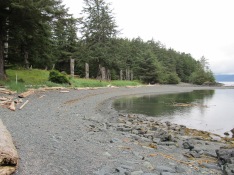 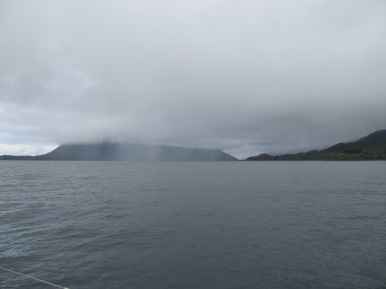 A squall on our way to SGang Gwaay 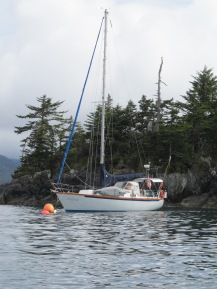 On the mooring at SGang Gwaay

The day we eventually picked was an oddity mostly because of the spontaneity with which we went for it – we spent all of 2 minutes making the call.  We started the day with a wonderful visit to SGang Gwaay – truly a mystical place – dodging squalls and wondering when the sky would open.  We were lucky to see many strong showers close by and avoid all of them.  We even enjoyed a great sail on the way back into the anchorage at Rose Harbour.  As we approached our intended stop and were mentally preparing for a tough evening of good food, a bottle of wine, and maybe some reading, I decided to listen to the weather – a broken repeater had made weather info very hard to get, so frequent attempts were important in order to get any sort of mental picture of likely developments.  This attempt was successful, and I poked my head back into the cockpit with the offhand remark that we should just cross now…start a 110nm trip at 2:30 in the afternoon.  Everyone had heard the forecast of SW winds to 20 knots with showers turning to rain in the morning.  I’d long since abandoned the thought of a night crossing and wasn’t really serious, so was mildly shocked to get a “Sure, why not?” from the crew. 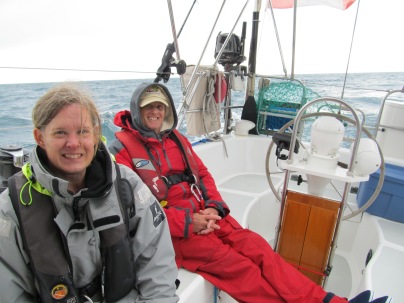 Enjoying an excellent sail before sunset

The sail that night was both amazing and difficult.  The wind was perfect – 8 to 23 kts on the beam – as were the seas.  The rain held off until we were within sight of our destination, and the scenery before sunset was stunning.  The short night was not stunning.  The  depth of the night was intense – like sailing through ink – and the cold was relentless.  And after an early morning the day before, so was the fatigue.  At 12:30 in the morning, my dad was clearly suffering and I sent him below to sleep while I kept watch.  Even though we were heavily reefed to slow the boat down, thoughts of plowing into one of the many trees we’d seen floating in the waters on the mainland side of the strait kept me tense as I shivered in my dark corner.  Two long hours later, Lori relieved me, but even in the cabin, sleep and warmth were elusive. 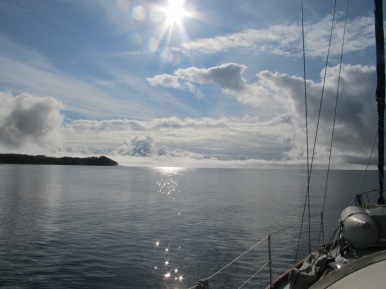 Seaforth Channel, after the deluge

Our route across Hecate Strait 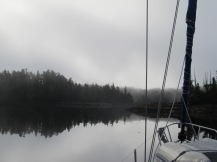 We arrived in Mouat Cove, just east of Ivory Island, at 8:10 after sailing 110nm in 17 hours, much of it at 5kts under reduced sail.  The promised downpour arrived pretty much as soon as we dropped the hook.  Needless to say, the relief and feeling of accomplishment were intense.

We’ve only crossed this body of water twice – we’re definitely not experts – but we do have some observations will likely be helpful in the future: